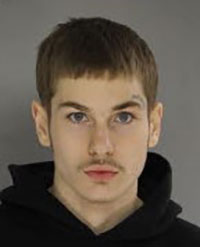 Media, PA – Delaware County District Attorney Jack Stollsteimer announced the arrest today of Mark Laird, 18, of Boothwyn, in connection with the March 15, 2022, murder of Reuben Rosado, 15. The victim’s body was found in Henry Johnson Park on Township Line Road and Veterans Drive, Trainer. The defendant has been charged with criminal homicide, murder of the first and third degree, and related firearms charges.

“The cold blooded execution of a juvenile is simply incomprehensible. But, tragically, that is what happened on the night of March 15. The defendant lured his victim to the park with the promise of a gun and, instead, shot him in the back of his head. Unable to keep his actions secret, the defendant then admitted to others what he had done. The defendant’s actions were senseless, as well as heart breaking,” said District Attorney Stollsteimer.

On the evening of March 16, Trainer Borough Police were dispatched to the area of Henry Johnson Park for a report of a deceased person. Upon arrival, the body of a juvenile male, subsequently identified as Reuben Rosado, was located in a wooded area of the park. A fired cartridge casing was recovered from the scene, as well as a cell phone.

“I want to commend Criminal Investigation Division Detective Timothy Deery and Trainer Borough Police Chief Frannie Priscopo and Officer Russ Mervine for their work in bringing today’s charges, and in apprehending the defendant,” said Stollsteimer. “I also want to thank Deputy District Attorney Matt Krouse and Deputy District Attorney Laurie Moore for their invaluable assistance in ensuring that this defendant is held to account for his actions.”

The defendant is being held without bail at the George W. Hill Correctional facility. His preliminary hearing is scheduled for May 5, 2022.